IMMR staff are frequent contributors to a range of papers and publications on the topics of monetarism, central banks, money and inflation. Links to these resources are listed below.

Tim Congdon's personal website holds his main writings over the last 40 or so years. During that period, he has been the most consistent advocate in the UK's public policy debates of the ideas that used to be known as "the Quantity Theory of Money", but in recent decades have been called "monetarism". Go to Tim Congdon's website.

IIMR Director Juan Casteneda guest edits Volume 2 of Future Europe Journal, which explores the topic of rising inflation and potential societal fallout that is pushing institutions to rethink the principles of monetary union. It includes a chapter by Professor Tim Congdon 'Can the Eurozone Manage its Free Rider Problem?'. Read more at Future Europe Journal Volume 2.

A rule-based monetary strategy for the European Central Bank: a call for monetary stability 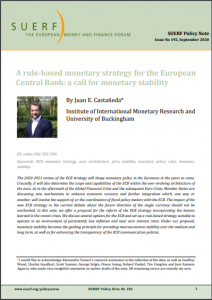 SUERF has published a policy note by our Director, Juan Castaneda, on the European Central Bank's 2020/21 monetary policy strategy review (Policy Note 192, Sept. 2020). Juan argues that monetary stability should become the guiding principle for providing macroeconomic stability over the medium and long term, as well as for enhancing the transparency of the ECB.

You can read the full paper on the SUERF website.

Inflation: the next threat? 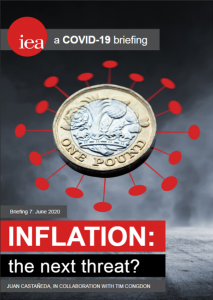 In a new briefing paper published by the IEA, Dr Juan Castañeda and Professor Tim Congdon examine the inflationary effects of the economic responses to the coronavirus crisis. The policy reaction to the pandemic will increase budget deficits massively in all the world’s leading countries. The deficits will to a significant extent be monetised, with heavy state borrowing from both national central banks and commercial banks. The monetisation of budget deficits, combined with official support for emergency bank lending to cash-strained corporates, is leading – and will continue to lead for several months – to extremely high growth rates of the quantity of money. The coronavirus crisis has shown again that, under fiat monetary systems, the state can create as much as money as it wants. According to the authors, the frequently alleged claim that “monetary policy is exhausted at low (if not zero) interest rates” has “no theoretical or empirical basis”.
If the increase in the amount of money continues as expected, Inflation: The next threat? forecasts an inflationary boom in the US by the end of 2021 or 2022, with possible and even likely double-digit inflation rates. However, central banks seem heedless of the inflation risks inherent in monetary financing of the much-enlarged government deficits. Following the so-called ‘New Keynesian Model’ consensus, central bank economists “ignore changes in the quantity of money”. The full report can be accessed here.

The Economics of Monetary Unions: Past Experiences and the Eurozone, edited by Juan E. Castañeda, Allesandro Roselli and Geoffrey E. Wood

This book has been published with  collaboration of our staff, Professor Tim Congdon and Dr Juan Castañeda.

In this book, a historical analysis of the precedents of the euro is examined within the context of the current issues affecting the Eurozone and the long-term effects of the institutional changes implemented since 2010.

The book begins by placing the Eurozone challenges in the historical context of previous monetary unions, drawing on the experience of the gold standard. It then specifically focuses on the problems arising from the running of permanent trade imbalances within the Eurozone. The authors explore the advantages and disadvantages of being a member of the Eurozone and attempt to measure the optimality of a currency area by the calculation of an index on internal macroeconomic asymmetries. They address the proposals recently made in favour of a fiscal union in the Euro zone; including the economic and political feasibility of fiscal transfers in the Eurozone. The final two papers discuss whether the monetary union is in fact more than just that, and whether it will lead inevitably to some form of political union if it is to survive.

With chapters by leading experts from both Europe and the UK, this book will appeal to students in Economics, Finance, Politics, EU integration and European studies; as well as academics and professional economists doing research in EU integration, the Euro zone, monetary history and monetary and banking unions in Europe, the UK and elsewhere.

Money in the Great Recession, edited by Tim Congdon 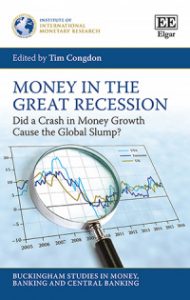 In the book’s introduction and first chapter Tim Congdon proposes that the Great Recession can be explained by a large fall in the rate of growth of the quantity of money, broadly-defined, which reflected developments in the banking system. In particular, he suggests that the regulatory demand for higher capital/asset ratios from September 2008 caused banks to shrink their risk assets and so led to the destruction of money balances. While banks undoubtedly had problems of their own making, officialdom’s tightening of regulation was mistimed and inappropriate, and had “vicious deflationary consequences at just the wrong point in the business cycle”. The Great Recession could have been avoided if quantitative easing (to boost the quantity of money), rather than the increase in capital ratios, had been pursued earlier.

The book features contributions from nine authors in total, taking different perspectives on the Great Recession. For more details see the publisher’s website.

This article forms Chapter 5 of Central Banks at a crossroads – What can we learn from history? edited by Michael D. Bordo, Øyvind Eitrheim, Marc Flandreau and Jan F. Qvigstad 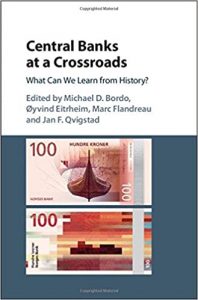 We conduct an empirical analysis of eight economies covering more than a century and find that independent central banks tend to be more durable in their independence in small open economies than in large economies. This is because the former have the option of being, and often are high trust societies, which allows the writing of simple, and therefore less affected by shocks, central bank contracts, and as Milton Friedman argued many years ago in his pioneering discussion of central bank independence, central banks need a set of instructions and that takes the form of a contract.

You can listen to Dr Castaneda discussing it in the video below: 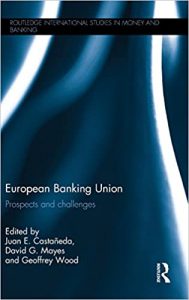 Recent failures and rescues of large banks have resulted in colossal costs to society. In wake of such turmoil a new banking union must enable better supervision, pre-emptive coordinated action and taxpayer protection. While these aims are meritorious they will be difficult to achieve. This book explores the potential of a new banking union in Europe.

This book brings together leading experts to analyse the challenges of banking in the European Union. While not all contributors agree, the constructive criticism provided in this book will help ensure that a new banking union will mature into a stable yet vibrant financial system that encourages the growth of economic activity and the efficient allocation of resources.

This book will be of use to researchers interested in Banking, Monetary Economics and the European Union.

Keynes, the Keynesians and Monetarism by Professor Tim Congdon

This book follows on from “Reflections on Monetarism” (See above) and is a series of essays relating to the debate between monetarists and Keynesians, including  the reputation of Keynes himself and how the two schools of thought have quarrelled about his legacy.

The debate between the two schools originated in the 1950s in the USA with the publications of a number of influential academic papers arguing that the quantity of money  played an important role in the determination of national income. In the 1970s and 1980s, monetarist economists occupied highly influential positions in the UK and US governments, but in spite of the vindication of their position by the economic history in the early 1980s in particular, the debate is still far from over, especially given  the dominance of Keynesianism in many UK universities – and indeed, in sections of the media.

This book can be downloaded in pdf format chapter by chapter from the publisher’s website by clicking here.

This collection of articles and papers was first published in 1992. Its objective was to add insights to the analysis of British economic policy in a particularly interesting period. Between the mid-1970s and late 1980s the main theme of British macroeconomic management was the attempt to establish an efficient framework of monetary control. For much of the period this framework was provided by a target for the growth of the money supply (broadly defined, to include bank deposits). The rational was simple: if excessive monetary growth caused inflation, targeted reductions in the rate of monetary growth would stop it.

The ideas behind the policy framework were known as “monetarism”. Since the publication of this book, monetarism has fallen out of favour. particularly in academia. Professor Congdon has nonetheless remained convinced that controlling the money supply remains the key to stable, macroeconomic growth. A full 25 years later, the articles and papers contained in this book thus remain as relevant as ever.

This book is available as a pdf which can be accessed here or else you can access the publisher’s website and download all or part of the book by clicking on the image on the left.

In most contemporary macroeconomics models and research programmes, money is but a scant afterthought - if considered at all.

The research being produced by the Institute of International Monetary Research is of the highest quality, and it is timely. For me and my students at the Johns Hopkins University, the IIMR is a "go-to" invaluable resource.

The IIMR’s online programme provides a useful and stimulating introduction into monetary theory and its recent history. Students of central banking, macroeconomic policy and financial markets will greatly benefit from the lectures and other programme materials. I congratulate the Institute for their success in putting together this programme.